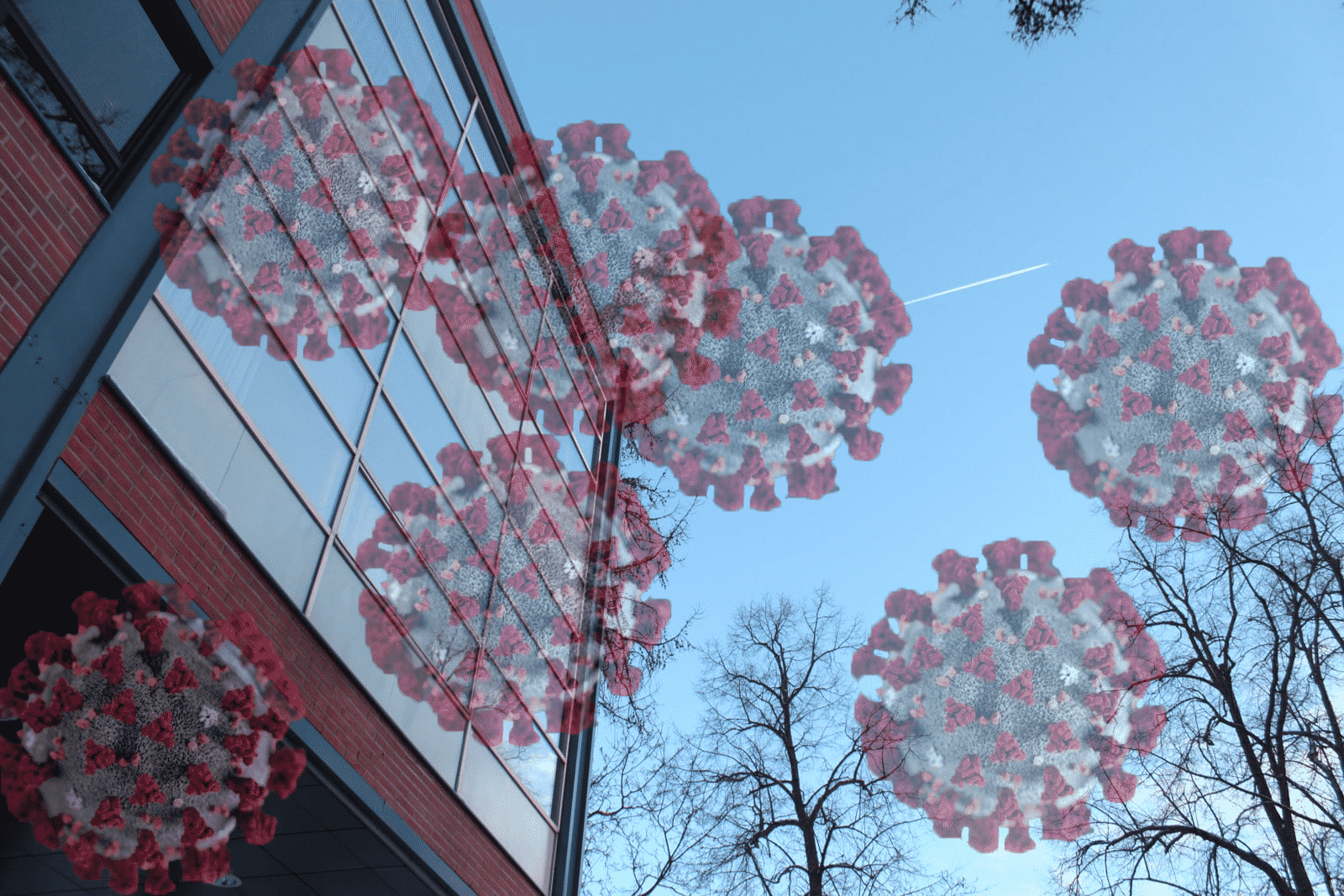 Since the weekend, everyday life in Finland has rapidly changed. Before last Thursday, Corona was not that noticeable for most of the students. But that changed when the University of Jyväskylä amongst other universities decided to ban all contact teaching and events.

Finnish government declared a state of emergency on Monday the 16th of March and introduced new measures. This came as a surprise for many exchange students and the uncertainty about whether to stay or to leave is growing.

The situation in Finland

According to the latest information, there are 272 confirmed cases of Corona in Finland, a country with a population of about 5.5 million people. The Director-General of the National Institute for Health and Welfare, Markku Tervahauta, said in an interview on Yle Radio Suomi that the actual number of infected people is suspected to be up to 30 times higher.

Since Saturday, only seriously ill people or members of risk groups and social and healthcare workers are tested on the virus. So in many cases, it stays unclear whether people with mild symptoms are infected or have a regular illness.

This uncertainty also includes the University of Jyväskylä.

Ágnes Stojcsics, Specialist in International Affairs from Student Union, said: “We got information during the weekend that some people at University have Corona-like symptoms, but they are not confirmed cases.”

Some universities, including the University of Jyväskylä, decided during the weekend to move all teaching online and most of the staff is working from home. This is valid until the 22nd of March with the hope that there will be more information about the development then.

Also shared facilities are closed and sports courses, trips, and other events are preventatively canceled.

Finnish Prime Minister Sanna Marin announced at a press conference on Monday that schools, universities and other educational institutions will be closed until the 13th of April.

“Most of the courses can easily be moved online and guidance for technical support will be provided by the Digital Services”, says Ágnes Stojcsics.

“The main question is how courses will be handled which can’t be given online, for example sports courses. The Student Union is working together with the university to ensure that students can carry on with their studies and to minimize the negative impacts of the current situation.”

The International Office has recently announced that exchange students will remain registered students at the University of Jyväskylä until the previously planned end of their studies abroad. According to this, there should be no problems to continue the studies from home whenever it can be arranged through distance learning.

Finnish Prime Minister Sanna Marin announced at a press conference on Monday that schools, universities and other educational institutions will be closed until the 13th of April.

Preparations are taken to close the country’s borders except for Finnish citizens and Passenger traffic to Finland should be suspended soon. It would still be possible to go out in the public, but everything unnecessary should be stopped and meetings of more than ten people should be banned. Many public facilities as museums, hobby facilities or youth clubs will be closed.

The newest developments spread uncertainties among the exchange students in Jyväskylä whether they should leave or stay. Some exchange students have already been called to return by their home universities, others haven’t heard anything yet.

The International Office in Jyväskylä has called on exchange students to follow the advice by their home universities. Those who received no other instructions would be welcome to continue studying and living in Jyväskylä and should follow the given instructions as any other student.

A concern of many students is that the next few days might be the last chances to go back home. Countries as Canada, the USA, and Spain closed their borders to most foreign travelers. Citizens are still allowed to go back to their country, but flights could get reduced or become very expensive. Stojcsics: “There is a lot of speculation at the moment and so much new information is coming in.”

In general, universities can only give advice and everyone should decide for themselves. But in Stojcsic’s view, the situation in Finland is not bad at the moment.

“It is, of course, important that safety instructions are followed and that we take care of each other, especially of people in the risk groups. But I don’t see more danger here than in most of the other countries.”

It would be important that students regularly check the email accounts that they have provided the University with and have a look at the latest updates at the university webpages.

What do the exchange students say?

The reactions of exchange students at the University of Jyväskylä are very different. Here you can read statements of some students from different countries:

Aude (22 years old) from France: “I am not going back to France because I think it is safer here. I thought about going back, but when I talked to my mom, she told me to stay here. Finland has less population so it is statistically safer. I don’t even know if I would have enough money to pay an emergency flight and I fear that I might not be able to go back if something happens at home. But if someone of my family would get ill, there is nothing I could do for them anyway. So I try to be around as a supportive person via Whatsapp and calls.”

At first, I did not take the virus too seriously, but now it scares me. It is growing in a way I did not expect it, although I am not sure if we dramatize the situation or not. I am a bit lost right now about going back home or not, because I am afraid to get stuck in Finland.

David (21 years old) from Spain: “I think it surprised everyone how serious the situation has become. But I didn’t consider going back home because many of my family members are part of the risk group and I don’t want to put them in danger by possibly transmitting the virus to them.”

I am not scared because I don’t feel like the people I know are in the danger group. The virus is not that bad on a personal level, the problem is more about the state level. But I think the measures which are taken at the moment are needed, necessary and the right way to handle it. At the moment I don’t plan to go back because I don’t have to be physically back in Germany and I still find things to do here in Jyväskylä. I don’t fear not being able to go back home. Airlines are shortening their operations, but I think there will always be flights available now and then.

“The development of the last four days changed my opinion absolutely. On Thursday I was worrying that my university or government might force me to go back. But with every day I realized that the situation got worse. I was afraid that eventually, all my friends will have to leave and that I am stuck here alone if I don’t decide to leave now. That is why I am leaving Finland in two days. I feel that in the current situation it is better to be home with my family. But I can’t even express how sad I am about it. I am still worried about if the situation will turn better in one or two weeks and my decision turns out to be the wrong one.”

Shannon (20 years old) from the US / Chicago area:

“In general I think the situation here in Finland is pretty calm at the moment. I don’t feel the sense of panic that people seem to experience elsewhere and I would prefer to stay here rather than going back. I feel safer here than in the US. But I will leave Finland nevertheless because my family is worried about what might happen when I stay. It seems very possible that I could get stuck here for an indefinite period of time. And my home university highly recommended to all students abroad to return. But I still plan to finish my semester via online courses.

“Right now I am just waiting for more information from my university because they are making the final call. My parents think it is probably safer here in Finland than in the US. I agree with them because traveling seems like not the best thing for me right now. I am just trying to stay calm and go on with my life until I get more information.”

“The last days didn’t change my opinion on the topic too much. But it got difficult to find bread or pasta in the supermarkets till WHO declares the virus a pandemic. I don’t consider going back to my home country because the airport is the easiest place to get infected and it is just a question to rather stay in my dorm in Finland or Hong Kong.”

I don’t feel so much pressure about the virus here, but it bothers me that most of the conversations and news are about it. It is exhausting, but currently, these are just the circumstances right now and we have to live with it. For me it is not such a problem that they are closing everything, I can always find ways to keep busy. I definitely don’t think about going back to my home country. I was meant to stay here till the end of May and I don’t want to interrupt it at this point. And even if I would get stuck for a time, I think it would be no problem to stay even longer than planned.”

The Coronavirus in a nutshell

The Coronavirus alias COVID-19 was first detected at the end of December 2019 in China. Scientists assume that it was first passed on to humans from an infected animal and spread with an unimaginable speed afterward.

On the 11th of March, the World Health Organization (WHO) declared the situation a pandemic, affecting people across national borders. In total, nearly 165,000 cases have been globally diagnosed, but the numbers are changing daily and a high number of undiscovered cases is suspected.

Symptoms of a Corona infection can be different in type and strength, but most common are high fever over 38 degrees Celsius, cough and shortness of breath. The virus spreads mostly from person to person directly, but can also survive on surfaces for a certain time. Incubation time can vary and lies between one and eleven days.

All in all, about 80 percent of the reported cases have been mild and most of the infected persons have recovered, but yet around 6,500 people died of the consequences. Still, scientists don’t know much about the virus, especially about how it might spread further.